Skeleton programming is a high-level (parallel) programming approach where an application is written with the help of (algorithmic) skeletons. A skeleton is a pre-defined, generic programming construct such as map, reduce, scan, farm, pipeline etc. that implements a common specific pattern of computation and data dependence, that might have efficient implementations for parallel, distributed or heterogeneous computer systems, and that can be customized with (sequential) user-defined code parameters. Skeletons provide a high degree of abstraction and portability with a quasi-sequential programming interface, as their implementations encapsulate all low-level and platform-specific details such as parallelization, synchronization, communication, memory management, accelerator usage and other optimizations.

Each skeleton has several different backends (implementations): for sequential C, OpenMP, OpenCL, CUDA, and multi-GPU OpenCL and CUDA. There is also a new back-end based on MPI and StarPU for execution on a cluster available, which supports some of the skeletons.

Depending on a skeleton call's execution context properties (usually, operand size), different backends (skeleton implementations) for different execution unit types will be more efficient than others. SkePU provides a tuning framework that allows it to automatically select the expected fastest implementation variant at each skeleton call.

SkePU 2 is a rewrite of SkePU, with a new user interface based on modern C++ syntax, such as lambda expressions; a new compilation model with a source-to-source translator using Clang libraries; a revised implementation and runtime built around variadic templates; and the same efficient parallel skeleton algorithms as before. The design of SkePU 2 emphasizes flexibility and type-safety, areas in which earlier work on SkePU 1.x had identified opportunities for improvement.

SkePU 2 removes the MapArray and Generate skeletons in favor of a generalized Map and adds the Call skeleton. It is not backwards-compatible with programs written for SkePU 1.x. However, translating existing source-code is straightforward as each skeleton in SkePU 1.x has a direct—or simpler—equivalent in SkePU 2 and later.

SkePU 3 builds on the modern foundation of SkePU 2 and adds new skeletons, new smart containers, an MPI backend for cluster execution and improves the interface and semantics of SkePU applications. It is not backwards-compatible with SkePU 2 programs, but the changes are of limited scope and old applications can be adapted with little effort. 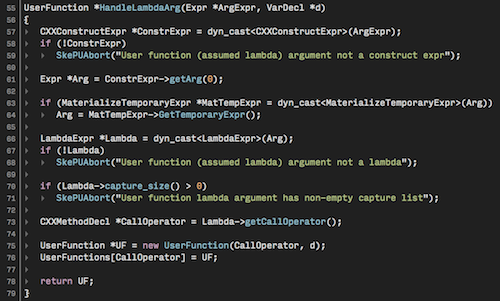 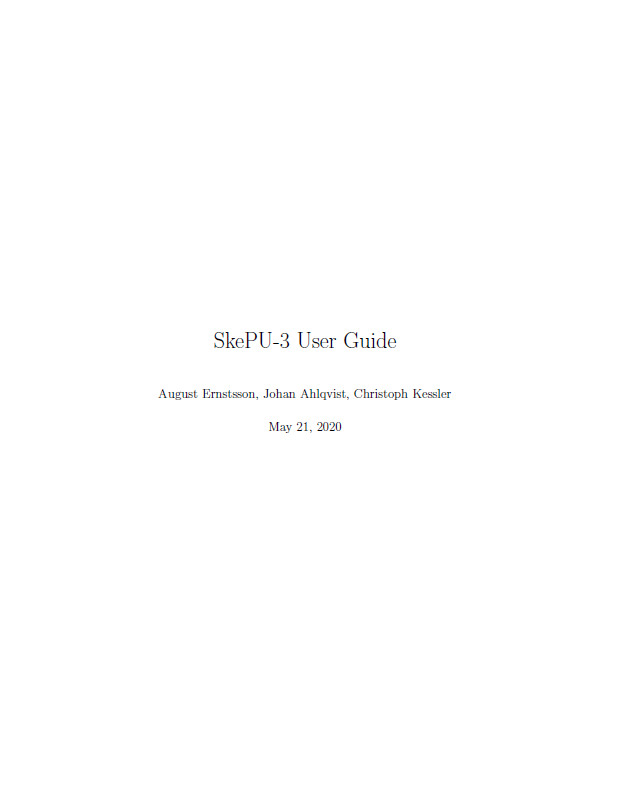 SkePU is licensed under a modified four-clause BSD license. For more information, please see the license file included in the downloadable source code.

SkePU requires a target compiler compatible with the C++11 standard (or later). Additionally, a system able to both compile and run the LLVM system, including Clang, is required (this needs not to be the target system).

SkePU contains the skeletons Map, Reduce, MapReduce, MapOverlap, Scan, and Call (and several new skeletons are currently under development). They are presented separately below, with a short program snippet exemplifying their usage. In practice, repeatedly calling skeletons and using multiple types of skeletons is encouraged, to fully utilize the advantages of SkePU such as the smart containers.

The Map skeleton represents a flat, data-parallel computation without dependencies. Each sub-computation is an application of the user function supplied to the Map. It works on SkePU containers by, element for element, applying the user function (sum in the example below) multiple times. Any number of equally sized containers can be supplied as arguments; Map will pass one element from each. For more general computations, it is also possible to supply extra arguments as needed which can be accessed freely inside the user function. These can be containers or scalar values.

Map can also be used without element-wise arguments, with the number of sub-computations controlled by the size of the output container only . Programs can take advantage of this, and the fact that the user function can be made aware of the index of the currently processed element, to create interesting use-cases. See, for example, the Mandelbrot program in the distribution.

Reduce performs an associative reduction. Two modes are available: 1D reduction and 2D reduction. An instance of the former type accepts a vector or a matrix, producing a scalar or a vector respectively as the result; the latter only works on matrices. For matrix reductions, the primary direction of the reduction (row-first or column-first) can be controlled.

MapReduce is a sequence of Map and Reduce and offers the features of both, with some limitations, for example only 1D reductions are supported. An instance is created from two user functions, one for mapping and one for reducing. The reduce function should be associative.

As with Map, the possbilities of zero element-wise arity and element-index awarneness in the user function create interesting possibilities. The Taylor program in the distribution uses this to perform Taylor series approximations with zero data movement overhead. A more typical dot product computation is used in the example below.

MapOverlap represents a stencil operation. It is similar to Map, but instead of a single element, a region of elements is available in the user function. The region is passed as a pointer to the center element, so manual pointer arithmetic is required to access the data.

A MapOverlap can either be one-dimensional, working on vectors or matrices (separable computations only) or two-dimensional for matrices. The type is set per-instance and deduced from the user function. Different edge handling modes are available, such as overlapping or clamping.

A skeleton computing the matrix that results from invoking an operator on all Cartesian pairs of elements from two (sets of) input vectors.

An efficient chaining of MapPairs and Reduce operations, with the reduction operating along the rows or columns of the intermediate matrix.

Several test applications have been developed using the SkePU skeletons, including:

The source code for some of these is included in the SkePU distribution. 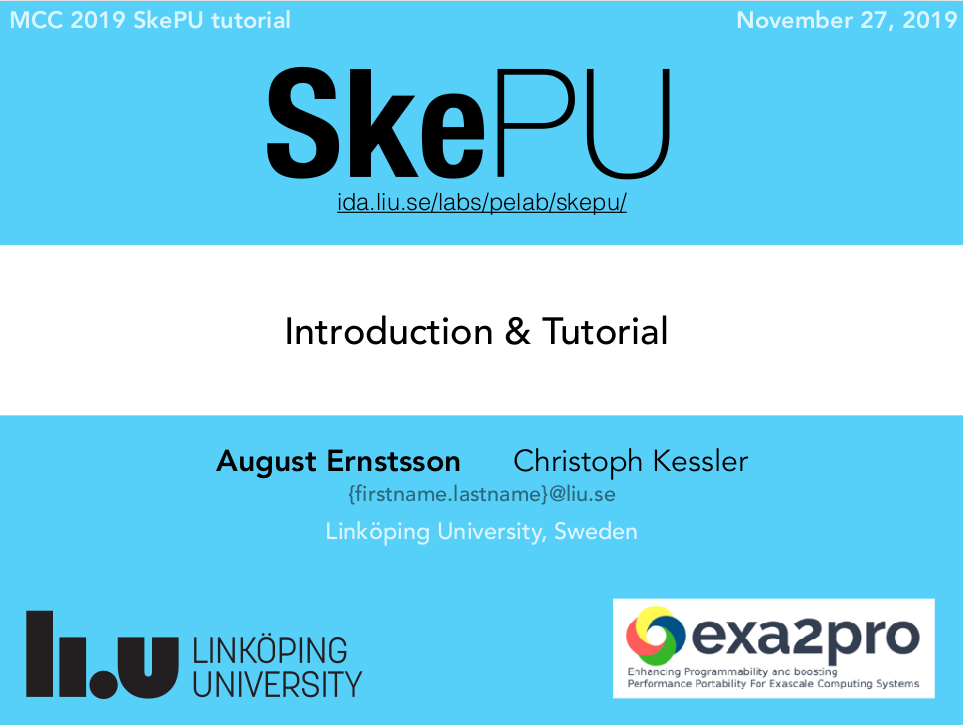 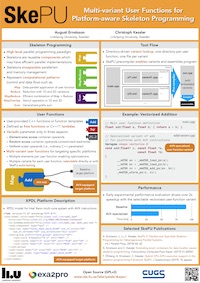 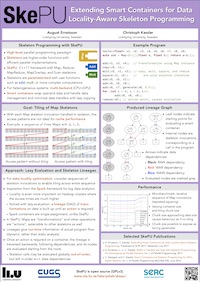 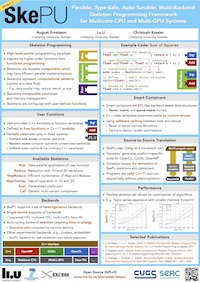 SkePU is a work in progress. Future work includes adding support for more skeletons and containers, e.g. for sparse matrix operations; for further task-parallel skeletons; and for other types of target architectures.

If you would like to contribute, please let us know.

This work was partly funded by EU H2020 project EXA2PRO, by the EU FP7 projects PEPPHER and EXCESS, by SeRC project OpCoReS, by CUGS, and by Linköping University, Sweden.

Streaming support for CUDA in SkePU 1.2 has been contributed by Claudio Parisi from University of Pisa, Italy, in a recent cooperation with the FastFlow project.

SkePU example programs in the public distribution have been contributed by Johan Enmyren, Usman Dastgeer, Mudassar Majeed and Lukas Gillsjö.

Experimental implementations of SkePU for other target platforms (not part of the public distribution) have been contributed e.g. by Mudassar Majeed, Rosandra Cuello and Sebastian Thorarensen.